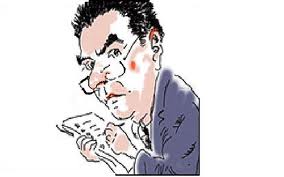 Since becoming Head Teacher of a new school in September I felt I had a proportionately dispassionate view of the school. I had invested all of my energies so far in establishing what sort of school it was and working out the most effective way of making it my school. This meant re-establishing a school vision, ethos, set of expectations for standards and galvanizing the whole school community together. I had been pleased with how rapidly things got moving and as we entered 2013, after two terms, I felt that although it was becoming my school, my judgement of the school was still firmly rooted in the past. I believed that this was a luxury and I used it almost as a suit of armour: I could robustly challenge everything but with a safety net of it not being my fault. This also worked well with staff as I wasn’t necessarily judging or ‘blaming’ them but the systems under which they had been operating. This also allowed them the freedom to commit whole heartedly to my vision (or move on).

The pace of change since September had been rapid with numerous systems and structures being developed, invented, and implemented: all designed to improve standards across the school…at some point. I made the judgement call that the systems had to be in place first, in line with everyone’s commitment to them and then we could focus on using those systems to improve and monitor their effectiveness. So, I felt that I was in the ideal place for an early inspection and I hoped the school would get a challenging inspection judgement to help justify my changes. I was certain that I would be immune to any feelings of responsibility of past standards and that I would only feel fortified and reassured, ready to push on some more.

And then I got the phone call.

I was fine, I kept my cool and as I calmly told staff and reassured them that we knew what we had to do, I was certain that I could convince Ofsted that I was the right person, in the right school, doing the right job. As the first day continued, two rather unpleasant feelings began to run through me in successive waves: I was not doing the right job and I was letting everybody down.

I have never felt so inadequate in my life especially when trying to justify whole school trends over time after spending 22 weeks in the job. The ‘narrative’ of the school that I had been telling myself, my staff, my governors, my parents was falling on deaf ears. Suddenly the firm ground I had been standing on was crumbling from underneath me as the inspection began spiralling out of my control. I was terrified.

If at this point I was feeling inadequate as a leader, it was after the team had left that I began to feel even worse. Why? Because everyone was being so, well, nice. Teachers, support staff, governors and many parents began rallying around me saying incredibly supportive things to me. (Don’t get me wrong, I wasn’t curled up on the floor weeping and declaring that the school might as well be taken out to the knacker’s yard and shot) but as I went around trying to support them, it was clear that they wanted to support me. It was then that I realised I wasn’t as detached to this school as I had tried to make myself believe. I also realised that my initial plan for improving the school had worked: everyone was united and behind me but sadly this just made me feel worse. On the outside I was trying very hard to put on a calm and brave face but inside all I was thinking was: ‘You’ve all put your faith in me…and all I’ve done is let you down.’ It was almost too much and that was the real surprise: I love my school!

Luckily, day two went better. The team seemed more willing to listen and they finally began to say the same things that I had been saying all throughout day one. By the end of the inspection they concluded that I did in fact know the issues of the school and I could be trusted to implement improvements. Was it frustrating to have them write areas to develop that were identical to the ones I had identified on my school development plan and school self-evaluation plan? Maybe.  Did they have to conduct day one with their ears blocked and eyes closed and unable to listen to my story? Maybe not. But, due to their uncompromising attitudes throughout that day they allowed me to see, for the first time, that I am leading a school community who trust me and want me to do my job to improve their school. They also made me realise that I am possibly, more attached to the school than anyone else and for that I suppose I should be grateful. So through slightly gritted teeth: ‘Thank you Ofsted.’