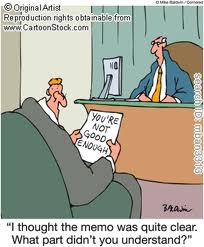 Teachers become Head Teachers because they have the vision and capacity to enable a school to improve. It’s a simple role and if time slowed down and days were twice as long every Head Teacher worth their salt could achieve everything on their own. Sadly, the Earth’s position in relation to the sun refuses to change and every Head must rely on the team around them to get the job done and this is often where things go wrong-or more accurately, this is where things grind to a halt.

I once heard another Head Teacher say that the problem with the leadership within any organisation is that it runs the risk of being populated with people who have reached their zenith and who aren’t talented enough to progress any further in their career. This seems rather mean-spirited but there can be a grain of truth in it. For the purposes of this post let’s assume we are not talking about the good ones. To all those dedicated Phase Leaders and Assistant Heads reading this, I am not talking about you, you are great. I am talking about that other lot and you all know who I mean: The Middle Leaders or to put it more clearly those people that would actually refer to themselves as a Middle Leader.

Middle-Leadership. I hate that term. It sounds so un-aspiring .It may as well be Not-Quite -Leadership or A-Bit-Of-Leadership or I’ll-Run-One-Staff-Meeting-A-Year-In-Order-To-Justify-My-TLR-Leadership.  Leadership is not about being in the middle: if you want to lead you have to be out in front.  You have to be visible and model the right attitude and behaviour to everyone else at all times. This is often where Middle-Leaders fall short.

To those newly in post I can’t blame them. Many middle-leaders start off with a reluctance to put themselves out there as an example to others especially if they were promoted internally. It is very difficult to start as a member of staff, on the same level as everyone else, and then suddenly find yourself in a position where you get to tell your peers how to improve. If anything, it can make Friday evenings in the pub awkward.

‘Anyone fancy a drink?’

‘Piss off; you said my display was crap.’

However, given the right coaching and with the right member of staff however, this can be addressed quite easily. They will quickly develop, move on and start leading effectively without upsetting their peers.

But what about those long-standing Middle Leaders, the ones that have been there for as long as you can remember?  Blissfully unaware that they are not mentioned in your SEF or are not invited to any serious SLT meeting. During performance management it becomes apparent that they have no desire to move forward in their career and while I do not judge people solely on their long term career expectations, they are so lacking in whole school perspective or desire to go above and beyond they end up becoming a significant drag on school improvement.

These members of staff have somehow managed to get on the post-threshold pay spine but when you ask them to run an assembly at short notice they come out in a rash and are speed-dialling the unions before you have time to check the conditions of their contract. When you ask if anyone could monitor the lunch hall because you’re short staffed they always manage to raise their hand just after the NQT jumps up and says they would love to do it. They are ‘comfortable’ and in the ever changing world of school improvement they are as effective as woolly gloves on an i-pad.

School improvement needs everyone to see the big picture and understand not only how being effective in their role will impact upon school improvement but how their role may evolve. Sadly, it is often the ‘secure and safe’ middle leaders who find this so difficult to achieve. They are uncomfortable working out of their well-established comfort zone and unwilling to shift their goal-posts. They are so used to judging their success using the narrowest of parameters that when they start to feel the squeeze, they buckle and their insecurity and ineffectiveness oozes out of them for all to see.

What do you do? Send them on another Middle-Leadership course? Coach them? Hope they leave? Most of the time you know it would be easier to cut them out of the loop entirely and leave school improvement to the professionals but this in turn would most likely cause resentment from everybody else. Whatever you choose, it is likely it will be a compromise between leaving them to quietly have no impact hoping no one notices and squeezing them so hard they split.

I saw a documentary about the American school system. One idea that intrigued me was their approach to staffing. Each year all the Head Teachers within each state would meet at a convention and they would take with them a list of all their least effective staff. In the American system any teacher can be relocated to any school within the state at any time. Bearing in mind some states are larger than the UK you can imagine the connotations this brings with it. The Head Teachers call this system ‘shuffling the shit’. Each Head hopes that they return from the visit with slightly better ineffective teachers than they went with. I’m not saying I approve of this system but I bet any Head reading this knows whose name they would take to that convention.

Maybe, with groups of schools working together as academy groups, this model may come into practice. Not to ‘shuffle the shit’ but to think how to really develop and deploy effective leadership across a group of schools or a city or even the country. Strong leaders could be shared, weaker leaders could be placed in less challenging areas or more challenging areas in order for them to develop at a more effective pace.  Schools would be working in real partnerships with staff harnessing their skills to impact not just a single school but a city-wide/country-wide cohort. (Obviously this system could be abused: teachers living in fear, heads abusing their power, staff members becoming black listed from working in a particular city…but let’s ignore that notion for now and let me dream.)

The fact is schools cannot succeed due to one lone Head Teacher doing everything. A school’s success lies in the culture of collective and visible leadership that is promoted and demonstrated. Middle Leaders should be out in front. Not every leader needs to aspire to be a Head but they should feel that they are developing the skills so that they could step up if required. If that sounds like your cup of tea then you will be an effective leader at any level. If that sounds unrealistic and not what you came into education for, please don’t apply for a job at my school. If you’re already in my school then you’re on my list!

One thought on “The Squeezed Middle”