Despite my best efforts and Birmingham’s extensive number of shops, I failed to purchase a pair of trousers. This is unbelievable; it’s not as if I have specialist tastes. I found one pair I liked (it had nice blue turn-ups) but when I picked them up I realised they were in fact a pair of shorts and I didn’t fancy attending our final evening meal with my knees bare. So it was back to the suit trousers.

Anyway, day three signalled the beginning of the end with a talk by Ben Page; Chief Executive of Ipsos MORI. An hour of statistics flew by where we discovered that people’s perceptions of ‘truths’ were influenced more by the media and their age as opposed to statistical fact. Most interesting was how even when gathering opinions to create statistics, the language of questioning was highly important. For example:

You are told that you have a life threatening illness. There is an operation you can have. The Doctor tells you a statistic that may help you make an informed decision: Half the people are told that:

In the last two years, out of all patients that had the operation, 75% of them continued to live for another 5 years.

The other half are told:

In the last two years, out of all patients that had the operation, 25% of them died within the next 5 years.

Despite the ‘Maths’ being identical, more people chose the operation when presented with the 1st statistic.

Very interesting, although those of us that have ever been presented with a Raise Online pack where there are significant amount of BLUE will have a firm understanding of the power of language when reporting statistics (‘lies, damn lies and statistics’ I believe the quote goes).

Next up was Pasi Sahlberg, a school improvement activist from Helsinki who was talking to us about the Finnish model of educational reform. He was a measured and quiet speaker whose messages rang out loud and clear. The talk focussed on the pitfalls of the Global Educational Reform Movement (GERM) that is sweeping its way across the UK and many other countries; that focusses on Competition, Standardisation, Test Based Accountability and Choice. The ‘Finnish Way’ changes these to Collaboration, Creativity, Trust Based Responsibility and Equity.

One point Pasi Sahlberg made really clear was that Finland didn’t set out its goals to be ‘the number one education system in the world’ but to create an educational system that reflected the needs of its children. Now as it happened, in doing this, they have pretty much got the number one education system in the world BUT by proxy as opposed to target. He also talked about the level of professionalism and talent needed in order to become a teacher. He presented a statistic that Ben Page would have been proud of on the number of student teacher applicants compared to the number of accepted places and graduates. I haven’t got the figures but think of a bar chart with one massively tall bar on the left and a really tiny small one on the right and you get the basic idea. It’s tough to become a teacher in Finland and no fast tracked system would ever cut the mustard.

The highlight was possibly Pasi’s offer to Gove to come and visit Helsinki for three days in order to see the principles and practice of their education system-not to copy but to observe and see how anti-GERM it is. Around the conference hall you couldn’t quite distinguish between the noise of applause and the noise of hands in pockets trying to find enough loose change to pay for the plane ticket. Seriously Mr. Gove, that’s a very kind and generous offer from Pasi, you would be silly not to take him up on it.

Next up was Chris Holmes, a Paralympic swimmer, owner of NINE Olympic gold medals and Director of 2012 Paralympic Integration. This was a truly wonderful, inspiring, moving and at many times hilarious speech. He talked about breaking through the barrier of blindness to fulfil his dreams of becoming an Olympian and the journey of helping to create and broadcast to the world the greatest Olympic and Paralympic games the world has ever seen.

I can’t even try and convey on how many levels Chris’s speech inspired the room. What resonated was the repeated notion of not focusing on what the end result would be: instead focus on the tiny improvement you have to put in place today. Combine that self-determination with a complete trust in the team around you and the end goal will soon be in sight and ready for winning.

Finally we had Jim Lawless who holds the record for the deepest free dive in the UK and also trained to be jockey in one year-despite being too old, too fat and never having ridden a horse before. It was a master class in ‘motivational speaking’ and I don’t mean that as a back handed compliment. He was very funny and made some poignant points on the notion of tackling your inner demon or ‘taming your tiger’ in order to achieve your goals.

My final thought that I took away from Jim’s talk was the idea of your life being a book and only you are holding the pen. (Now at this point, I would normally roll my eyes, vomit and ask for my money back) but to be fair to Jim he put it across very well (well he is paid for this so you would hope so). If your life was a book, it would only have a certain number of pages before it ends, so what are you going to do on each page to make sure that when you reach the end it was all worth it? Again, this mirrors the idea of the little steps that you need to do in order to win big. Plus he did get the whole room standing up, squatting pretending to ride a race horse which is something Charlie Taylor might want to work into his routine next year.

And that was in. Jane Creasy said goodbye, I picked up my packed lunch, went around the exhibition room one more time to see if there were any more free pens, sweets, bags I could take home and off I went.

As my first ever conference I thoroughly enjoyed it and as it went on and I saw more and more and more people talk on a variety of different things, the more clear and focussed the overall lessons became.

And all of that in one pair of trousers! 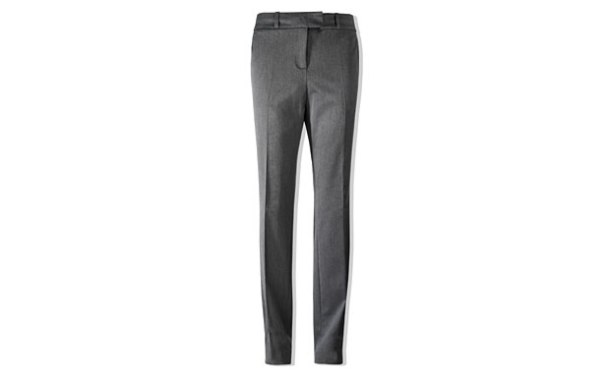